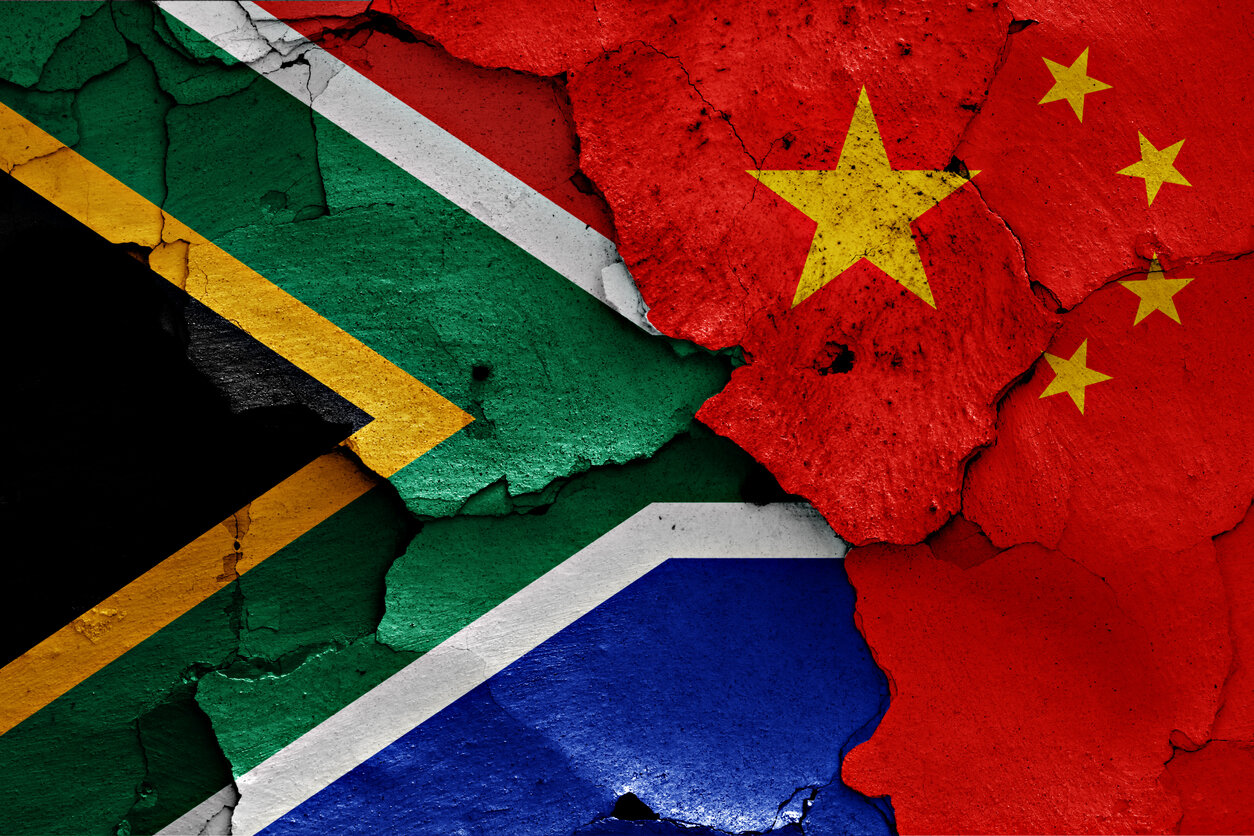 Is China the new colonial power in Africa? It might appear so when you take a look at China’s extensive relationship with Africa today. From trade and investment through to development aid and the Belt and Road Initiative, China’s growing influence in the region has leapfrogged that of the US in the past decade. Concerns around Chinese corruption and human rights have been swept aside to achieve influence in Africa on a massive scale. But is this a resource hunt or just debt trap diplomacy?

In our latest regional spotlight, we examine China’s involvement in Africa from a 360-degree perspective, taking a deeper look into the situation in Djibouti, Rwanda, and Mali. We also review the compliance complications and how your business can navigate Sino-African corruption challenges.

Many countries have provided financial support to Africa over the years, traditionally in the form of aid, but China is different. China has positioned itself as more of an investor than a donor, and in some circumstances, it is seen as a predatory one. Take, for example, the breathtaking Chinese investment in African infrastructure. Hundreds of miles of highways and roads have been built alongside airports, railways, and ports. Much of this forms part of the Belt and Road Initiative, a new Silk Road that provides the infrastructure for China’s economic and political influence to extend around the globe, but some investment is also strategic. Africa presents a number of economic opportunities for China and closing the infrastructure gap will fuel this growth while creating a debt bond that is difficult to break.

Africa’s population is expected to double by 2050, with 80 percent of this growth happening in the cities. China sees an opportunity to sell to Africa’s emerging middle class and large youth population. Over the last ten years, China has surged ahead as Africa’s largest trading partner, with trade between China and Africa valued at $185 billion. But it’s not only goods that are of economic importance; Africa’s extensive natural resources are also vital to China’s growth strategies.

As well as being its largest trading partner, China is also the region’s largest creditor with $150 billion worth of debt being extended to African companies between 2010 and 2018. One third of that has been given to Angola, reflecting China’s drive for oil and other raw materials. In many cases loans do not come with the human-rights requirements imposed by Western aid. But the COVID-19 pandemic has prompted many African countries to ask for a debt-freeze, potentially opening up more opportunities for China to consolidate its influence in the region. The ability for China to leverage political support in the region is significant, especially when you consider that African votes count for 54 seats at the UN.

China has its own business priorities at heart when it comes to Africa — economic, strategic, and political — but how are these manifested in specific countries? Let’s take a deeper dive into a few to showcase the scale of China’s involvement.

With its important geostrategic location, Djibouti is of growing international importance, especially due to expanding US-China rivalry. Aware of this, the current government plays one country against the other. Long accustomed to a French presence, now there are Americans, Chinese, and others from whom to seek the best deal. Chinese relations with Djibouti have boomed over the past decade and, in 2017, China completed its first overseas military base there. Among its many investments, China has financed and maintained substantial shareholdings in a transnational railway, the completion of which will connect a multipurpose port, container terminal, and an international industrial park manufacturing hub, all of which are largely owned by Chinese corporations.

But this presence has drawn controversy. Heavy borrowing for infrastructure means that Djibouti now owes China more than 70 percent of its GDP, with most of Djibouti’s economy relying on Chinese credit. Western nations have grown increasingly worried about China’s economic presence and leverage over Djibouti. Some warn that Djibouti is at risk of losing strategic national assets and its sovereignty if unable to repay its large Chinese debt. COVID-19 has brought this debt-trap into sharp focus.

Rwanda and China established relations in 1971, and cooperation between the two countries has continued to grow for mutual benefit. From 2005 to 2019, China enacted USD 920 million in investments and contracts in Rwanda. In 2018, China and Rwanda signed an economic and technical agreement, where China pledged $32 million to drill wells throughout Rwanda. China has also invested $60 million into the Rwandan agriculture sector, spent $20 million on solar projects, and is expanding a hospital in Kigali to increase its number of beds tenfold.

China provides 21.1 percent of Rwanda’s imports, making it Rwanda’s largest importing partner. Rwanda has also reportedly imported software from China, which can be used to both filter and block malware, as well as filter and censor online content.

China has an economic presence in Mali, and also provides troops to the U.N. peacekeeping force there. Beijing’s influence however does not rise to the level it reaches in other African states. China invested USD 1.85 billion in Mali from 2009 until 2017, most of which is dedicated to improving Mali’s transportation sector, followed by relatively small investments in real estate and energy. However, China stopped investing in Mali in 2018, according to American Enterprise Institute.

Despite that, Mali is trying to advertise itself to China’s vast market for tourism. Time magazine reported in June 2019 that Malian forces began accompanying Chinese tourists in motorcades and marketing the potential to see “the real Africa.” Tourist numbers, however, are extremely low, and will surely remain so given the dangerous security situation.

China continues to be actively engaged in the UN’s MINUSMA peacekeeping operation. Its initial deployment of 170 troops under the U.N. banner to Mali in 2013 constituted only the second time Chinese forces participated in a peacekeeping mission  Some analysts consider China’s decision to become involved in Malian affairs as part of a larger strategy of legitimizing its presence in Africa, beyond “economic interests in Africa’s raw materials.” China remains heavily involved in MINUSMA today.

The 360 View: The Impact on Chinese Businesses

Much of the rhetoric on Sino-African relations focuses on the role of the state, but over 10,000 Chinese businesses operate in Africa, of which 90 percent are privately owned. Criticism of these businesses is rife, especially on infrastructure projects, with many being accused of poor track records on labor. Much of the profits generated are not invested back into the local economy but instead returned to the Chinese economy.

But Chinese businesses have had to overcome three major barriers to operating in the region: corruption, personal security, and language and cultural issues. Sub-Saharan Africa continues to be the lowest scoring region in the Transparency International Corruption Perceptions Index. In a 2017 McKinsey survey, between 60 and 87 percent of Chinese firms said they paid a “tip” or bribe to obtain a license. Inevitably Chinese businesses have been exposed to some of the notoriously corrupt business practices and “Very Bad Habits” that play out in the region. This has played out recently in two major cases.

The recent Luanda Leaks scandal, focused on the corrupt practices of Isabel dos Santos, Africa’s richest woman, and embroiled a number of Chinese businesses. This far-reaching case highlighted that even Chinese businesses are not immune to the ingrained corrupt practices that are found on the continent. The second recent case involved the former Hong Kong politician Patrick Ho, who was imprisoned for three years for the bribing of African politicians at the UN. Ho worked for an NGO that was funded by a Shanghai-based conglomerate that was heavily involved in the Belt and Road Initiative.

Any business looking to invest in the growing African market, Chinese or otherwise, must tread cautiously and be prepared to overcome compliance hurdles in a region where transparency is not the norm. Information in the region can be patchy at best, requiring detailed levels of due diligence on potential business and partners. Particular attention must be paid to establishing beneficial ownership, identifying corrupt practices as well as any political influences that may be playing out.

IntegrityRisk has extensive experience of due diligence and third-party screening in the region. Key to our ability to navigate intelligence gathering challenges, particularly in non-transparent jurisdictions, is our ability to provide elusive details about corporate registration, ultimate beneficial ownership, and litigation history.